While The Gazette is to be commended for its intention throughout the course of this year to share with its readers their vast collection of historical photos, the series got off to an unfortunate and rocky start with a significant mistake in its first posting. Most probably due to a clerical error made by someone many years ago, the chosen image ostensibly depicted Dominion Square in a winter scene taken in 1941. Well, as is clearly evident in the otherwise beautiful likeness, it was indeed wintertime but the plaza depicted was in fact Victoria Square.

As a local historian well familiar with many of the quirks of Montreal’s numerous public spaces, I was immediately suspicious when I noticed in the background the narrow road snaking up the hill found in the middle right of the photo. It is actually Beaver Hall Hill, located on the north side of Victoria Square. (The rise is particularly evident in the on-line version of the picture). In addition, there is also nothing in that published illustration reflecting the Dominion Square we have all known down through the years, including the homes on the left.

In point of fact, the structure that dominates the centre of the photo is not the Sun Life Building but rather the Canadian General Electric Building constructed in the early 1930’s at the corner of Beaver Hall Hill and Latour Street (today, Viger). The site is now occupied by the Banque Nationale du Canada’s high-rise structure, which has been home to that financial institution for about 40 years. Behind it, but barely visible in the 1941 period picture, is the 29-storey Bell Canada Building, constructed, in 1929, on the grounds of the then recently demolished St. Andrew’s Presbyterian Church.

The edifice on the right of the image was home, in 1941, to the warehouses and ateliers of the Henry Morgan & Co. Limited (today, The Bay). The terrace homes, present in the centre left of the picture, were nearly a century old when this image was captured. To be sure, several of them are written of at the time of the sectarian Gavazzi Riot in June  of 1853, which ultimately led to the deaths of some 40 Montrealers. These houses appear in many of the sketches and illustrations of that hapless, now distant event. A silent witness to Montreal’s vibrant past, they were levelled not long after this photo was taken.

Victoria Square (formerly, Haymarket Square) and Dominion Square (today, Dorchester Square) were, and are, two of the city’s most prestigious public spaces. However, in the interest of historical accuracy, one should not be confused with the other. 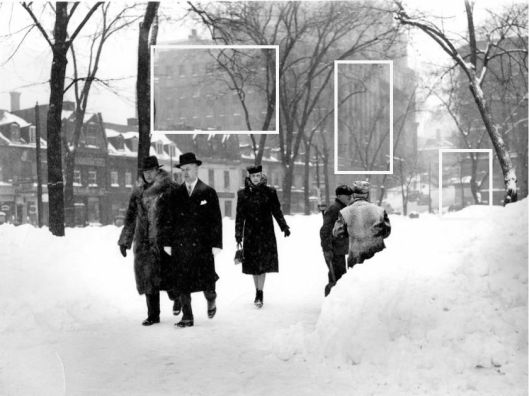