When I think of it, I came very close to not learning the remarkable story of Edward Brindle, my maternal great grandfather. With the inevitable passage of time, and our own preoccupation with our daily slog, nobody ever really took a moment to tell me what an extraordinary man he was. You see, Edward Brindle died 100 years ago today at Vimy Ridge.

I made the link to his tale myself, and since no one had volunteered the information, I decided to ask questions to those around me. First was my maternal grandmother who told me, many years ago, about the death of her father-in-law at Vimy Ridge, which she had mistakenly placed in the year 1916. She added no further details, and as I was quite young at the time, I did eventually lose interest in the subject.

Much later in life this diversion returned, and I decided to gather up as much intelligence on the life, and death, of Edward Brindle as I could. Of course, as my grandmother was no longer with us, I had to turn to other sources, and, having become a bit of a genealogical sleuth, I had heard that an individual’s military records were kept in Ottawa, most probably on Wellington Street.

In August of 2002, I wrote to the Personnel Records Centre, then a division of the National Archives of Canada, today Library and Archives Canada. Within a couple of weeks, I excitedly received a large, thick envelope chock-full of information related to my great grandfather’s involvement in World War One. I hardly knew where to begin.

Piecing it together, I quickly learned that Edward Brindle arrived in Quebec with his wife and children from Blackburn, England, around 1908. They initially settled in Valleyfield where my great grandfather toiled in the local textile industry, an activity with which he had been well-acquainted in Blackburn. In fact, it was not uncommon at the time for Canadian concerns to solicit labourers in Lancashire in order to meet their need for workers on this side of the Atlantic.

Shortly after World War One broke out in 1914, and despite his obvious family obligations, Edward Brindle tried to enlist in the Canadian Expeditionary Force (CEF). To that end, his ‘Medical History Sheet’ provides a wealth of information for someone who lived over a century ago. Great grandfather was all of 5’7¼”, 134 pounds, with a ‘good’ physical development, and the presence of no (thankfully) small-pox marks on his body. Both his hair and eyes were brown.

Tattoos were also indicated by the examining authority, and Edward Brindle had one on his left forearm, which read simply ‘America.’

The most astonishing detail to emerge from the myriad of official World War One documents forwarded to me that day is that my great grandfather was initially rejected from the CEF, due to the presence of “enlarged veins on both legs”. Not to be discouraged, and in what could only be described as a white-knuckle decision, Edward Brindle agreed to undergo surgery in 1915 in order to have them removed. In that regard, he spent a full 19 days in the old Montreal General Hospital on Dorchester Street, and that he had the further misfortune to develop a peritonsillar abscess while there.

Below, old Montreal General Hospital on Dorchester Street in 1909 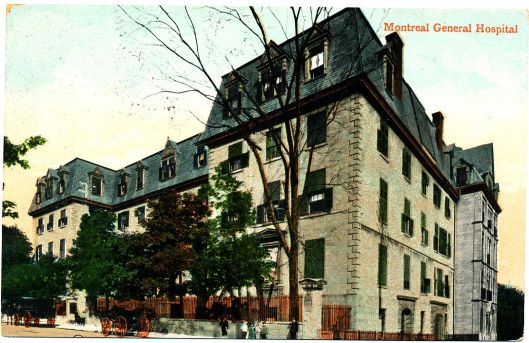 Released from the hospital on March 27, great grandfather sailed for Britain with his unit, the 42nd Battalion (Royal Highlanders of Canada), on June 10. They arrived in Boulogne-sur-Mer on October 9, 1915.

Once in France, Edward Brindle’s health problems continued. Difficulties with both his feet, and later the development of a fever of ‘unknown origin’, much of 1916 was spent in and out of field hospitals. In early 1917, he contracted influenza only to recover sufficiently enough from that to be sent on to participate in the ferocious Battle of Vimy Ridge, where he was ‘killed in action’ one hundred years ago today.

It is difficult for me in 2017 to understand what would motivate a man to undergo, voluntarily, such an ordeal. Nevertheless, I remember him, particularly this day, and pay homage to the incredible sacrifice he, and so many others on both sides of the bloody conflict, made.