Published in the Montreal Gazette on January 26, 2015

I read with interest Celine Cooper’s fascinating column “Overprotecting children has its own risks” (Gazette, January 19). The degree to which youngsters are watched over today contrasts markedly with the way in which they were so often neglected a century ago.

For instance, on two occasions in September of 1905, The Montreal Star ran stories about lost children, the second of which appeared under the title Strange Case of Missing Boy.

The straightforward, unemotional news item read simply: “A little boy of five years of age was found wandering in the street last Thursday, and as the little fellow could not give any account of himself, he was taken to the police station and is now in charge of Captain Loye, of the Chenneville street station. The police think it strange that no inquiries have been made for the missing boy.”

A couple of years later, a thirteen-year-old youth, Joseph McDonald, went astray on August 24 but the fact was never reported to the authorities until the middle of September. A report in the Star simply stated that the mother had “no clue as to his whereabouts.”

On other occurrences, children simply disappeared overnight. For instance, on the afternoon of November 19, 1907, Maria Tessier, the youngest of a family of fifteen children inhabiting an east end neighbourhood, did not return home after her four o’clock school dismissal.

Living with her family in a cold water flat on Maisonneuve street (today, Alexandre-de-Sève) in a tiny courtyard at the rear of the houses on the street, little Maria could not be found anywhere. The tiny six-year-old had seemingly just vanished into thin air. So wrought with despair were her parents that they even visited the city morgue to see if she might be found there!

The schoolgirl, as it turned out, showed up the following day having spent the night with a friend’s family not too far from her own home. So euphoric were her parents that they accepted their daughter’s explanation that the incident was all due to a misunderstanding among the three of them.

More atypical adventures frequently took place, however. Take, for example, the story of twelve-year-old Harry Yard who, in October of 1907, appeared at the door of the Boys’ Home on Mountain Street. Seems the schoolboy had been placed by his father on a train in Connecticut destined for Montreal. He was given his uncle’s address but, unfortunately, the youngster lost it yet he had the presence of mind to make his way to the Boys’ Home for assistance. Once there, he shared his uncle’s name with them only to be told that there was no such person by that name in the Montreal Directory. The newspaper report ended there.

Sometimes, however, children went astray in the dead of winter. This was the case in December of 1906 when a young boy around twelve years of age was found wandering about, alone and half frozen, on Ste. Catherine Street. He had been lost in the streets of the city since 7:00 o’clock the previous evening. Although no one had reported a missing child, the police did manage to locate his parents on Sebastopol Street in Point St. Charles.

It is obvious then that during the Edwardian Period children were not watched over as they are today. Offspring were often abandoned in the streets to their own means and entertainment, even at very young age. Such was certainly the case with five-year-old Sydney Bell who was killed, in May of 1910, by a tramway while left alone by his parents to play on Ste. Catherine Street.

There should surely be some middleground between leaving children entirely to their own devices, as was so often the case a hundred or so years ago, and today’s near obsession with shielding boys and girls from all risks whatsoever – to the point, in certain communities, of thoughtlessly ruling out tobogganing!

Below, boy climbing back of St. Catherine Street tramway, August 31, 1912 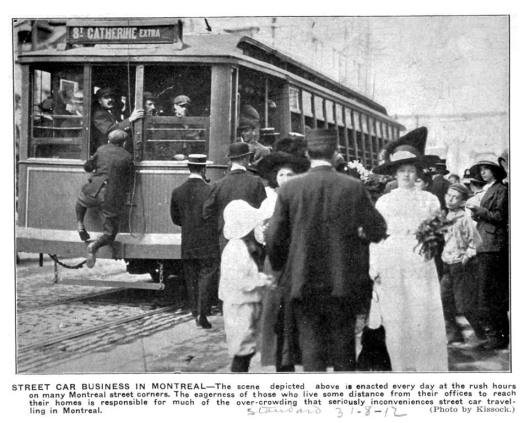