Published in the Montreal Gazette on June 15, 2013

Samuel Taylor Coleridge and his celebrated poem ‘The Rime of the Ancient Mariner’ come to mind when I think of Montrealers’ plight last month. Published in 1798 in Lyrical Ballads, it includes this now famous stanza:

“Water, water, every where,

And all the boards did shrink;

Water, water, every where,

Nor any drop to drink.”

Such was seemingly the quandary of this city’s thirsty residents who find themselves surrounded by historic lakes and rivers: “Water, water, everywhere nor any drop to drink”.

Indeed, deprived of fresh drinking water in our homes for nearly 48 hours, Montrealers were being told that this was the worst such event in the town’s rather long and colourful history.

A century or so ago, citizens were basically always told to boil their water before consuming it. In Edwardian times, for example, there were no filtration plants of any sort and people drank, untreated in any fashion, essentially what was drawn directly from the St. Lawrence River. Only those of considerable wealth could afford what we now commonly call bottled water.

Other than that, however, with tap river water frequently came little surprises.

For instance, in its June 28, 1906 edition, the Montreal Star reported the now somewhat amusing story of a man living on St. Denis Street who witnessed a two and a half inch rock bass minnow emerge from his faucet. “It is not every day that a man catches a fish in his house,” pretended the Star’s correspondent.

(below, sketch of fish which emerged from tap on St. Denis Street)

Surprisingly, it was not an uncommon occurrence, according to newspaper testimony from the period. In fact, it was often stated that there were many fish in the uncovered McTavish Reservoir at the time. From there, the smaller ones commonly made their way through the underground network of pipes and eventually would show up in a kitchen or bathroom sink. Others, of the larger variety, inevitably got stuck in the pipes, where they died and decomposed, becoming very much part of the drinking supply.

Fish were not the only living creatures to be found in Montreal water all those years ago. That same June 1906 article spoke of a tramway conductor who found an earthworm in his drinking glass as he was guzzling from it. “I had drunk the glass of water,” said the streetcar employee, “and when I happened to look in the bottom of the glass I saw this big red worm, which might just as well have gone down my throat while I was drinking the water.”

A century or so ago, no one was surprised then that periodic bouts of typhoid occurred in Montreal, and other industrialized cities. The water, along with the milk supply, was highly suspected as the source of the problem. Men who drank beer regularly were found, more often than not, to be typhoid-free, while those who drank the town’s water lay in hospital, or, worse still, in their coffin.

(below, Edwardian advertisement for bottled water) 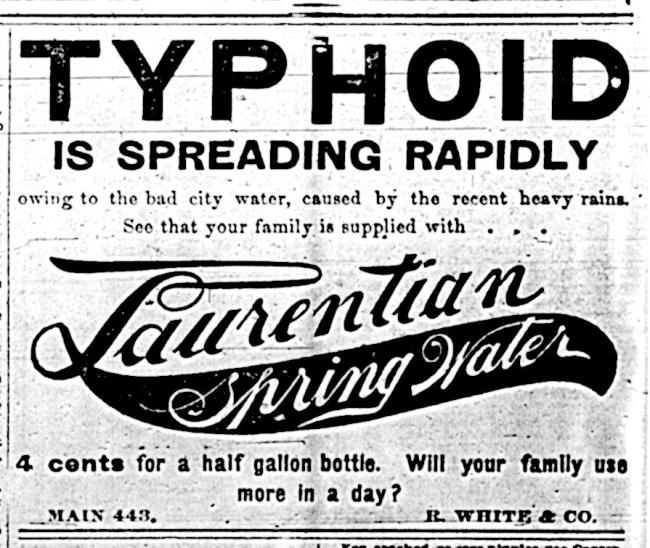 And it wasn’t only living organisms disturbing the quality (or lack of quality!) of the city’s drinking water. Some Montrealers, who were complaining about the brownish colour of our tap water last month, will be staggered to learn that a broadsheet account from the autumn of 1908 actually claimed that another substance was emanating from household faucets. “Montreal Water Taps Give Out a Copious Flow of Axle-Grease,” headlined the Star in October of that year. The article went on to describe how one Thomas Macdonald of Pointe St. Charles watched in amazement as the grease slowly oozed out of his faucet for about half an hour!

As lamentable as the state of affairs was in our town, it was far worse in Bradford, England. In July of 1906 in that West Yorkshire city, a decaying human corpse was found in the town’s reservoir. Citizens were appalled. However, when it was revealed that the cost of emptying the basin to remove the body was estimated to be in the neighbourhood of £3721 (a fair amount of money in the day), it was simply decided to let the decaying process run its course!

So now that our water advisory is over, I suppose we should all be grateful that we are alive and well in our much beloved Montreal in the year 2013, and not living in this city a century ago, nor in Bradford, England, for that matter!