Published in the Montreal Gazette on March 16, 2013

With the advent of a well – anticipated spring, Montrealers will soon be emerging from their celebrated underground network of city centre plazas and shopping malls. The streets of the town will again come to life with tens of thousands of bargain hunters and day-trippers ambling happily about the downtown core. In that regard, perhaps no spot is more popular than that of the Peel and St. Catherine Street intersection that has, for well over a century, been a veritable carrefour of the city.

Indeed, the illustrious urban junction has in its own right a long history of colourful activity to its credit. Nevertheless, Montrealers did not always appreciate all of the goings-on. Take, for instance, the time in June of 1907 when an exasperated citizen wrote to a city daily complaining about the poor driving habits of those passing through that same intersection in their new “fandangled machines.” Chief complaint was, of course, the excessive speed of 15 MPH (25 KPH)!

On another very different occasion, some 38 years later, traffic was kept to an absolute standstill as tens of thousands of Montrealers poured into the streets to mark the end of World War II. Huge crowds occupied St. Catherine Street with the focus of the V.E. Day revelry being at corner of Peel. There, Montrealers let loose with joy and celebration to observe the end of a long and deadly war.

The intersection as such is as beautiful as any you will find in Montreal. Looking north along Peel provides a magnificent panorama of the slope leading up Mount Royal, ending with an unencumbered view of the mountain itself. Gazing south, the view is equally enchanting – historic Dominion Square and, further in the distance, Place du Canada.

Three of the four corners encompass vintage city buildings. The oldest of the three is the four-storey Bagg Building erected in 1911 by the John Stewart & Co., a Westmount based construction company. Just recently restored, today the sparkling clean terracotta-clad edifice is home to H & M.

Three years later, in 1914, the ten–storey Drummond Building was put up in just seven weeks on the northwest corner of Peel and St. Catherine. Nearly a century in age, the remarkable structure is a formidable presence in the very heart of Montreal.

Finally, on the southeast corner is the Dominion Square Building (today home to the Gazette and the Montreal Tourist Office, among others). At the time of its construction in 1929, it was the largest office building in Canada. Designed by the architectural firm of Ross & Macdonald, this extremely elegant edifice stands some twelve-storeys high and was erected over the foundations of Erskine Church, a late nineteenth century Presbyterian religious sanctuary.

Like all major Montreal intersections in years gone by, Peel and St. Catherine was frequently patrolled by several on – duty policemen, one of whom would direct the flow of traffic. In the early twentieth century, one of the most popular of these men was Constable Hugh Maguire whose regular beat was that very same prominent junction. A well – liked officer, Maguire never hesitated to assist passers-by with their enquiries. He was particularly appreciated by McGill University students who always enjoyed playfully and teasingly interacting with him.  In October of 1909, all Montrealers were distraught to learn that Maguire, who had contracted tuberculosis (a veritable scourge in Montreal at the time), committed suicide in Mount Royal Cemetery on the grave of his daughter who had died of the same disease a short time earlier. For the longest time, his absence was felt at the historic uptown crossroads.

From rowdy political demonstrations to Stanley Cup and Grey Cup parades, from end of the war celebrations to royal visits, the intersection of Peel and St. Catherine has seen it all in its century and half of existence. Spring will shortly bring it to life once again as Montrealers get on with the agreeable business of enjoying one of the most striking carrefours in the city.

(below, St. Catherine Street looking west from Peel photographed by me in July 1976) 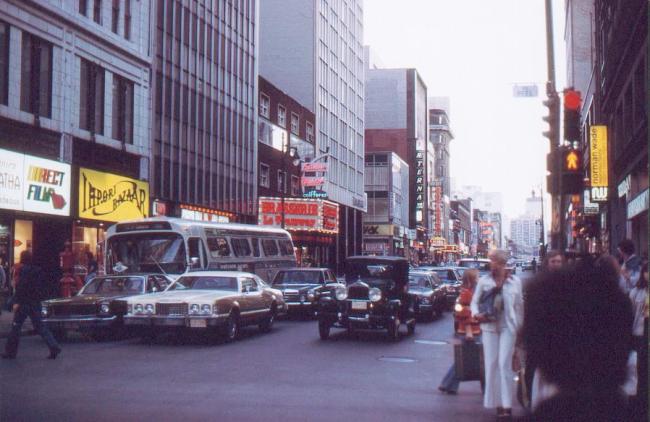