Published in the Montreal Gazette on August 25, 2012

It was with great interest that I read about Concordia University Professor Ronald Rudin’s desire to commemorate in some way an out of the ordinary Montreal historic happening (“Monumental search begins”, Gazette, July 7, 2012). In that regard, the Concordia University professor reminded me of my own delight in local history and I accordingly offer him, and Gazette readers, this somewhat unusual anecdote from our city’s colourful past.

Ironically, it was just two weeks ago that I drew to completion my long-standing interest in the late Dr. Charles Blake – just days before Marion Scott’s article about Rudin’s quest.

For those who don’t know (and that would certainly be most), Charles Blake was a late 18th, early 19th century Montrealer whose life in this city was of considerable significance. The same, however, can also be said of his demise for it was especially in death that the good Doctor Blake became perhaps more noteworthy simply because of the number of times his body was inexplicably moved from place to place.

Born in Bath, England, in 1746, Charles Blake arrived in the Province of Quebec in the spring of 1776 as part of a British contingent to fight the American Revolutionary War. Upon his return to Montreal in 1777 from an unsuccessful expedition at Fort Stanwix (today, Rome, N.Y.), Dr. Blake was appointed to the position of Royal Surgeon at the General Hospital. Two weeks later, he was given the commission of Surgeon to the Montreal Garrison, a position that he held until December of 1783. He subsequently retired from the military, settling in this city for good. He mixed medicine and business in a successful private career, a career that only ended with his death in Montreal in 1810.

Dr. Blake’s name appears in many legal documents in the Province of Quebec, later Lower Canada. One of the more fascinating of these is from an early murder case tried before the Court of King’s Bench here in Montreal.

After a guilty verdict had been rendered against one Ignace Vaillancourt, Chief Justice Monk pronounced: “That the prisoner being taken hence from the Common Gaol of the District from whence he came, and from thence, the day after tomorrow, that is to say on the ninth day of March instant, to the common place of execution, and that he then and there be hanged by the neck till he be dead, and that his body immediately afterwards be delivered to Charles Blake, Esq., of Montreal, Surgeon, to be dissected and anatomized”.

Blake married twice and by the second marriage there were two daughters. Mary Harriet Blake, who died at the age of 20, and Ann Blake who married the influential Justice Thomas Cushing Alywin. It was Ann Alywin who became very much preoccupied with the eventual fate of her father’s corpse.

For one reason or another, when Dr. Blake died in 1810, his widow decided not to bury him in either of Montreal’s principal Protestant cemeteries of the time: St. Mary’s New Burial Ground (today Parc des Vétérans, near the Papineau Metro Station) or the old Protestant Burial Ground (today Complex Guy Favreau). Instead, Blake’s body was placed in a burial vault on land that the Blake family owned near Champlain and Dorchester Streets in the city’s East End. For over 35 years, Charles Blake rested in this remote place of repose, joined, as the years passed, by his daughter Mary Harriet and two other individuals.

For some unknown cause, however, on May 23rd, 1845, the four bodies were removed from the vault and taken elsewhere (probably the nearby St. Mary’s Cemetery) only to be returned on August 21, 1852, to the crypt along with a fifth body, that of Sarah Anne Lane.

In the interim, a quarter of the city had burnt to the ground in the Great Fire of July 1852. Lost in that conflagration was St. Thomas Anglican Church, which had been built by the Molson family on the land of the famous brewery for the spiritual well being of their employees and the surrounding community.

The loss of St. Thomas created an Anglican void, so to speak, in the east end of the fledgling town. It was decided, therefore, to proceed quickly to the construction of a replacement place of worship, this time to be named St. Luke’s. The land upon which the church was to be raised was donated to the Bishop of Montreal by Charles Blake’s daughter, Mrs. Ann Alywin, provided that the chancel of the edifice was constructed over the burial vault. St. Luke’s was so erected and held its first service on June 17, 1854. 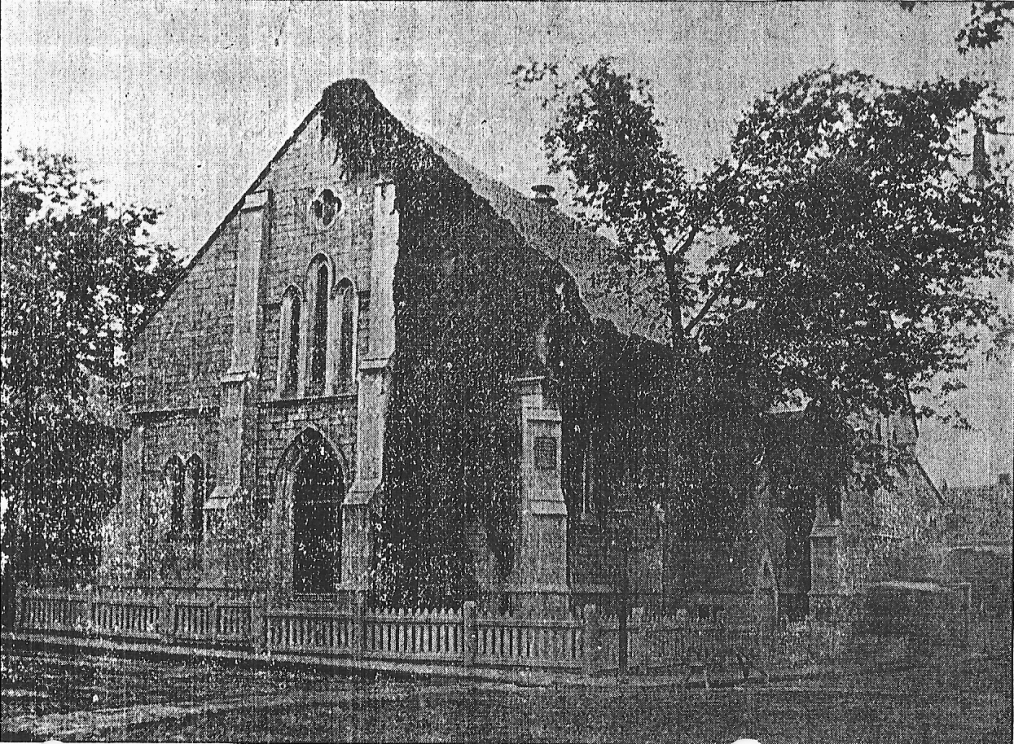 Initially, St. Luke’s did quite well, but by the mid 1870’s the parish fell upon difficult times. Fearing the eventual sale of the modest yet beautiful ecclesiastic edifice, Mrs. Alywin obtained a special act of the Provincial Parliament that permitted the transfer of the bodies in the Blake vault to some safer venue. As her husband (who had died in 1871), was already buried in Quebec City’s Mount Herman Cemetery, this seemed the ideal and most logical location.

Accordingly, in May of 1875, Dr. Blake’s body was removed for the fourth time from its ‘final’ resting place and transferred to Quebec along with the bones of more than a dozen others who had come over the years to rest in the Blake family mausoleum. They were all interred for the last time on May 25, 1875, in Mount Hermon Cemetery. Mrs. Alywin joined her husband and father in 1881. However, at least as late as 1900, bones were still seen to be strewn about the old burial chamber in St. Luke’s Church.

St. Luke’s survived for another 25 years at the same location when on October 25, 1925, the church building was sold to the Russian Orthodox congregation of St. Peter and St. Paul, who still occupy it today.

On June 29 last I visited for the first time the quaint little ‘sobor’ (‘cathedral’ in Russian) where I was very cordially received by Archpriest Anatoliy Melnik. ‘Father Anatoliy’ (as he is known by most) knew little if anything about the story of the crypt but was greatly intrigued by it. I explained to him that it would be found beneath the chancel of the now Russian Orthodox Cathedral.

Minutes later, we proceeded towards a winding staircase leading to the somewhat spooky basement of the dated structure. Sure enough, at the bottom of the flight of steps, and, as decreed by the Blake family, beneath the chancel, and behind a very heavy door, was found a thick stonewall, windowless undercroft which could only have been the early nineteenth century ‘final’ resting place of Dr. Charles Blake.

There are no longer any bones to be seen. The ancient crypt is now used as a tool room as well as a storage area for some very magnificent – looking icons.

Today, it is just one of Montreal’s many unconventional and obscure historic wonders. 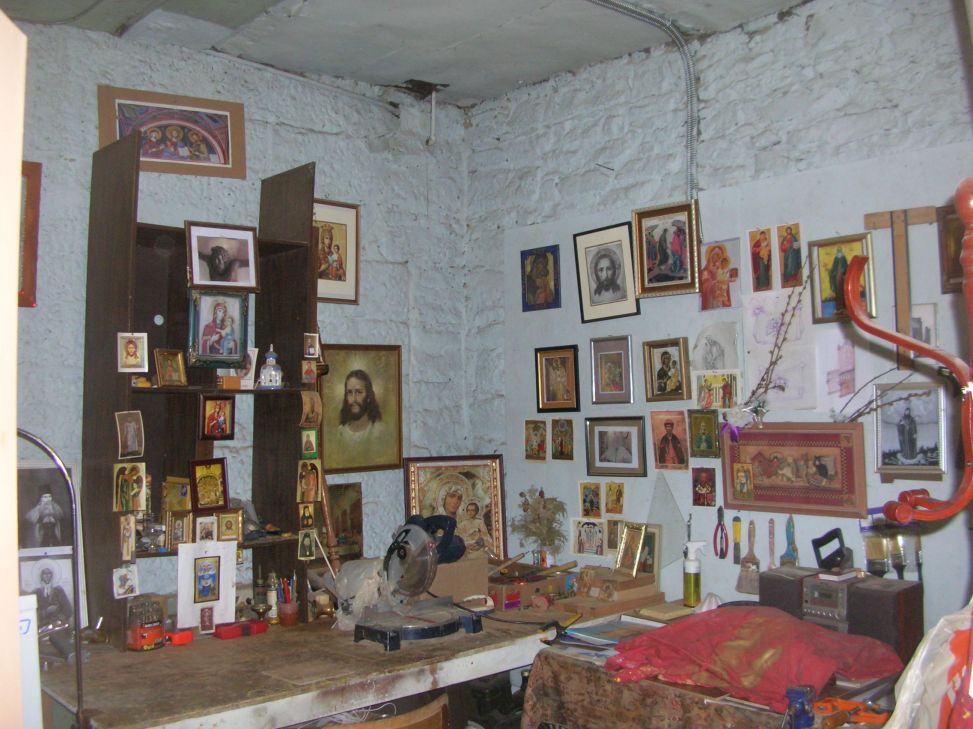