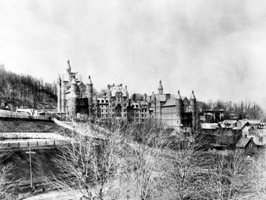 In that regard, having reached a certain age, I had yet another occasion not that long ago to visit the chateau – like Royal Victoria Hospital on the slopes of this city’s majestic Mount Royal. Perched high on University Street, the iconic structure has been part of Montreal’s urban landscape for well over a hundred years.

Composed mostly of Montreal limestone, the vast medical compound was officially opened on December 2, 1893, in the presence of the Governor General, Sir John Hamilton-Gordon (The Earl of Aberdeen). The institution was devoted to the needs of the sick “of all races and creeds” and to the training of nurses. The eighteen acres upon which the hospital is built was procured for some $90,000. Some six hundred men were engaged in its construction and the entire project is estimated to have cost approximately  $800,000 – a significant amount of money for the time. Henry Saxon Snell, a prominent British architect of the day, designed the complex.

On the way out of the dated health centre, I happened upon a door leading to the infirmary’s Medical Records Office. As an avid local historian with a love for archival documentation of all sorts, including hospital files, I made a note of the bureau’s particulars.

Later that same month, my curiosity getting the best of me, I met, in that very same room I had unintentionally passed by only a week earlier, with Mr. Jeffrey Smith, Supervisor of the Medical Archives Services of the MUHC.  Given its age, and the fact that, as a young man, I had undergone two operations within its walls, I was particularly interested in the archival holdings of the ‘Royal Vic’, as the institution is affectionately referred to by most Montrealers.  As it turns out, those records are very extensive indeed.

I was politely informed that the relatively contemporary, active files are stored within the hospital’s Medical Records Office while inactive dossiers are housed with the Iron Mountain Document Storage Provider in Laval. These folders can be hurriedly delivered, if need be, to the baronial-style Pine Avenue edifice within a very short period of time.

Records from the first half-century of the Royal Victoria Hospital’s existence are now, generally speaking, kept in safekeeping at the McGill University Archives (MUA). There, they are subject to number of conditions with regard to their accessibility but, as a public archive, the MUA struggles to make available as much of their enormous collection as possible.

While some of the library’s fascinating compilation has been microfilmed as a back-up copy, most of the documents are in their original form and found in the massive bound ledgers so popular in times gone-by.

Annals pertaining to the administration and history of the Royal Victoria Hospital are, by and large, readily obtainable for consultation. On the other hand, dossiers containing the health information of an individual are governed by legislation and, as such, not accessible to the general public.  This restriction would apply to patient records – even those of the long dead.

McGill University Archives is also the repository of the early transcripts of the University Lying-In/Montreal Maternity Hospital (1844-1852) once found on Prince Arthur at St. Urbain Street. It was for the longest time associated with the Royal Victoria Hospital. In addition, the MUA also retains the early nineteenth century files of the Montreal General Hospital from when it was situated (until 1956) at its age-old location on Dorchester Boulevard, at the corner of St. Dominique. Moreover, documentation from the School of Nursing of both hospitals is to be found there as well.

While Quebec legislation (L.R.Q., chapitre A-2.1 Loi sur l’accès aux documents des organismes publics et sur la protection des renseignements personnels) governs access to many of these records, you may indeed request to see your own personal medical file held by the Royal Vic, or any other hospital in Quebec for that matter. The consultation requires an easily-obtained appointment and the presence of a hospital archivist during the viewing. In the case of the ‘Vic’, one should contact the Access to Health Information Office for a rendez-vous which would take place in hospital’s Registrar’s Office on the main floor. It is important to note, however, that under all circumstances your medical file remains the exclusive property of the institution in question, and that it cannot be altered in any fashion.

It goes without saying that the very survival of all of these precious and historic documents is almost a miracle in itself.  In January of 1905, a major fire (the worst of all possible enemies of public records) destroyed much of the Administration Building of the Royal Victoria Hospital. It would appear that most, if not all, of the medical files accumulated up to that point in the hospital’s history surprisingly survived the far-reaching blaze.

For that good fortune, those of us intrigued by hospital chronicles can be truly grateful.