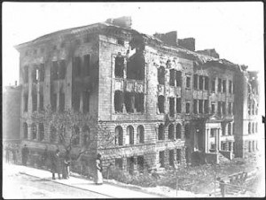 In a little under two weeks during the month of April 1907, McGill University lost two vintage buildings to fire.

The first fire, which occurred in the early morning of April 5, totally destroyed the Macdonald Engineering Building (known at the time as the Applied Science Faculty) that had been officially opened by Lord Stanley in 1893. It was named after Sir William Christopher Macdonald, one of McGill’s most generous benefactors. Macdonald, who until his knighthood in 1898 spelled his name McDonald, had made his fortune in Montreal in tobacco manufacturing, a dubious activity about which he forever lamented his involvement.

Designed by architects Sir Andrew Taylor and William Gordon, the edifice was five storeys high with an immense glass effect on the upper story where some  first year students were known to sunbathe during the summer months. Taylor’s building included a symmetrical, Italian Renaissance façade and whose exterior was assembled (much like most of the McGill campus) with Montreal limestone.

The blaze originated on the third floor and quickly took hold of the entire structure. An alert policeman rang the alarm at the corner of Milton and Shuter Streets (today Aylmer).

McGill caretaker, Hubert Lunn, was awakened by the brightness of the flames engulfing the edifice. Thinking that the sun had risen and that it was time for him to get up, Lunn made haste. His window faced the campus grounds and when he looked out, he saw the once – beautiful Mechanical Engineering Building enveloped in flames from the second floor all the way to the roof.

The conflagration started around 5:00 A.M. and within only three hours the entire pavilion was destroyed. There was irony to the early spring fire and the Montreal Star quickly picked up on it. “At half past six the roof fell in and then followed a scene of grandeur which of its kind has rarely been surpassed in Montreal. High up towards the heavens the flames rose in such majestic beauty that the onlooker forgot that hundreds of thousands of dollars worth of treasures were being swallowed up.”

Indeed, the loss was estimated at $750,000 while the building was insured for only $420,000. The inferno consumed all, including an extremely valuable Reuleaux Collection of Kinematic Models that was considered to be “the finest in America.” All student records and papers belonging to the faculty were completely destroyed.

In the midst of the blaze, there occurred quite unexpectedly what was at first thought to have been an explosion. In fact, the huge dynamo used to power the building’s elevator had come crashing through the structure, flinging burning timber, stone and bricks about the site. The Star pursued its paradox: “The fall of the dynamo added to the scene of beauty for skyward went sparks by the millions and the heavens were lighted up so that the early riser who got a privileged peep at them before day light interfered with the grandeur of it all, thought that half the city was on fire.”

The conflagration was fierce but fortunately the robust winds were coming from the northeast and spreading the burning embers upon the football field on the main campus. A sudden change in direction would have immediately threatened many other structures east of the campus, including the Diocesan Theological College on University Street.

No sooner had the building been destroyed, Macdonald took charge once again. A new fireproof edifice was quickly erected at his expense upon the foundations of the old. It was designed by Percy Erskine Nobbs, the Director of McGill’s School of Architecture at the time. Approaching its completion, Nobbs had affixed to the south wall of the new edifice his commemorative sculpture ‘Phoenix Rising from the Ashes’ which is still present today, more than a century later.

Tragically, the April 1907 “beautiful blaze” was not without a further irony. For a university with but few fires in its history, less than two weeks later a second conflagration essentially destroyed the Old Medical Building, including its historic museum and library.

Perhaps not surprisingly then for the longest time the year 1907 was truly considered to be McGill’s ‘annus horribilis’.