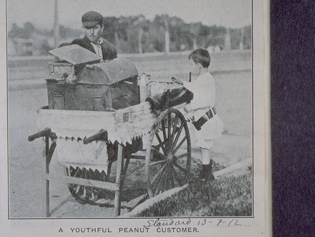 Hawker and boy in Fletcher’s Field (Jeanne Mance Park) in July of 1912.

Published in the Montreal Gazette on September 24, 2011.

In an extensive Letter to the Editor that appeared in the August 18, 1906 edition of the Montreal Star, a distraught citizen lamented, in general, the many shortcomings inherent in the city’s hygienic  conditions, and in particular its food supply. The correspondence dealt with a litany of local issues from the horrible condition of the city’s streets to the quality of Montreal’s edibles sold in the thoroughfares and public markets of the burgeoning town.

One subject matter especially preoccupied the Medical Health Officer of the day, Dr. Louis Laberge. It would seem that many European immigrants to Montreal brought from their respective countries – especially Italy – the tradition of the selling of food produce in city streets. One practice, that of the public hawking of an inferior variety of ice cream, was particularly problematic.

Commonly known as ‘hokey – pokey’ ice cream, this ‘poor relation’ of the sweet creamy frozen food was frequently sold by the dab, indiscriminately placed on a piece of paper of questionable cleanliness. It was retailed for a penny, usually to local children by  immigrant boys and young men peddling it  from hand carts. A child would ask for a ‘penny wipe’ and the purveyor would provide. In Edwardian Montreal, a favourite location for these vendors was St. Urbain and Craig Streets (today St. Antoine).

Many Montrealers were critical of the custom in question. Wrote one Edward Davis in May of 1907 : “My contention is that ice cream sold in the streets, made under filthy conditions, constitutes poison. It is also well known that children have been poisoned by the same”. (May 11, 1907)

The unwholesome business was eventually  stopped by the authorities obliging the practitioners of the trade to find other products to peddle. As a result, during the summer of  1909, more and more of these ‘hokey – pokey’  men (as they were referred to at the time) turned to the hawking of a rather  questionable liquid concoction to eek out a living. The creation, which resembled to some degree lemonade, or “near – lemonade” as one local newspaper occasionally alluded to it  (May 11, 1909), was sold in the streets to children for a penny a glass. However, many adults believed that the watery blend represented an even greater danger to health than had in fact the tainted ice cream.

Sure enough, the Montreal Star reported in its May 11, 1909 copy that a resident of St. Urbain Street described how that, “as a result of drinking the new juvenile refreshment, three of his young children were seized with severe stomach cramps, followed by violent vomiting, medical aid having to be summoned. A similar story is told by a family in the next street. As the youngsters of both families had been regaling themselves with the new liquid delicacy from the ice cream cart (sic), a strong suspicion rests upon that particular article as the cause of the trouble”.

Of course, the source of the problem was multifold and that same newspaper account  described it succinctly. “In most cases the so-called lemonade was ladled out of not over-clean tin tubs by a proprietor with unwashed hands, and served up in glasses equally uncleaned”.

In addition, the lack of personal and product purity was further aggravated by other issues. Most public vendors, for example, were located (frequently under umbrellas) in the dusty, windy, and dirty streets of summertime Montreal.  These factors led to the spread of bacteria in the air which invariably found its way upon the essentially-uncovered fare  flogged in those same avenues.

However, most youthful peddlers proved very imaginative. Each time the municipal authorities attempted to regulate, or eliminate, the selling of a particular item on city streets, the men would re-surface as vendors of another food item; for example, ‘hokey – pokey’ sandwiches. Nevertheless, the same issue always remained – that of public hygiene.

Bread, like ice cream and ‘near-lemonade’, was also subject to much controversy. The Star gave details in September of 1908 of Dr. J. J. McCarrey, Montreal’s chief food inspector, illustrating to the press several  loaves of bread that his inspectors had seized that very morning. “You can see that this loaf, while a white one, strongly resembles a currant loaf, and flies are sticking out of it in so many places”, reported the clearly exasperated good doctor.

Meanwhile, the death rate in Montreal, particularly for children, continued to rise unabatedly during the Edwardian era.