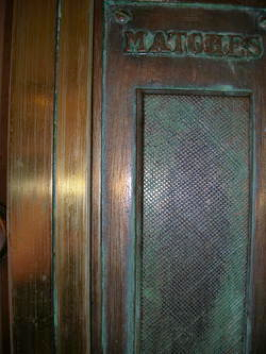 Every now and then, when observant, we are gently reminded that ours is not the first generation of Montrealers to inhabit this island. Our everyday treks through this city whisper to us the undeniable fact that this venerable metropolis was and is the striking creation of many people – some of whom are still with us, and others – many others – who are long gone. This enchanting revelation is found in diverse forms in virtually all corners of the city.

Recently, for instance, while leaving The Bay Department Store in downtown Montreal, my eyes glimpsed the presence of several relatively-small brass plates which were affixed to the frame of each of the doors fronting St. Catherine Street. Now that particular part of the building is the oldest wing, dating to the shop’s arrival on the celebrated thoroughfare in 1891. Having almost inadvertently spotted them, I immediately wondered what they were.

Upon close examination the plaques were actually clearly identified match flints with which gentlemen, in days past, might light up as they left the store (no self-respecting woman would be caught smoking in the Victorian period). These extremely coarse and rigid tablets were meant to accommodate only lucifer matches, the more familiar booklets not having arrived on the scene until much later in time. At what point they ceased to fulfill their function, I don’t know, but the rather inconspicuous flints -noticed today by so few hurried Montrealers- are plainly a legacy from another long-gone period of Montreal’s colourful history.

Bequests, however, come in many different forms. Not too far beyond this department store giant is the Church of St. John the Evangelist. The church itself, constructed in 1878, is a jewel of Montreal ecclesiastic architecture and the resplendent creation of Reverend Edmund Wood, the founder of the parish.

It is widely believed that in the 1880’s the back of this same church was used as a teaching area for St. John’s School, the forerunner to what is now Lower Canada College. What is little known, however, is that the interior brick wall found underneath the choir loft of this “High Church” carries a modest amount of graffiti from the pupils of that same institution. Although increasingly blanched with the passage of time, the signatures and years of earlier Montrealers are still easily visible to the searching eye. In their own almost circumspect fashion, the mischievous pupils good-naturedly “tagged” simultaneously well over a century ago both the church and history. Thankfully, at least, they weren’t playing with matches !